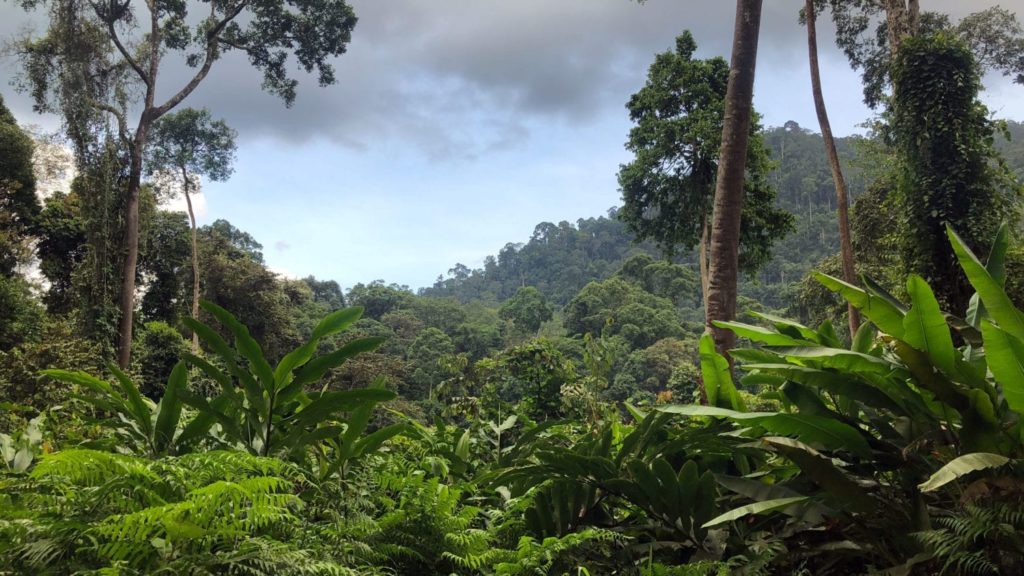 Living on San Juan Island and running the San Juan Island Inn Collection, we are always mindful of our ecological footprint. We pride ourselves on being a green inn and restaurant and are always looking for ways to be more sustainable in what we do.

So when it is our turn to vacation, my husband Dave and I frequent destinations and properties that have the same core values. Our travels take us to remote marine parks and protected land-based preserves. We marvel at places that are off the grid and create their own infrastructure – water from rain catchments or desalinization, solar and generator power, and the ways they separate and handle their waste stream to be as carbon neutral as possible.

From first-growth rainforests deep in the Borneo jungle to marine parks in remote island archipelagos in Sabah Malaysia and Indonesia, we experienced firsthand how each region is trying to make a difference. They are doing their share to preserve their special piece of paradise for today’s visitor and for generations to come. 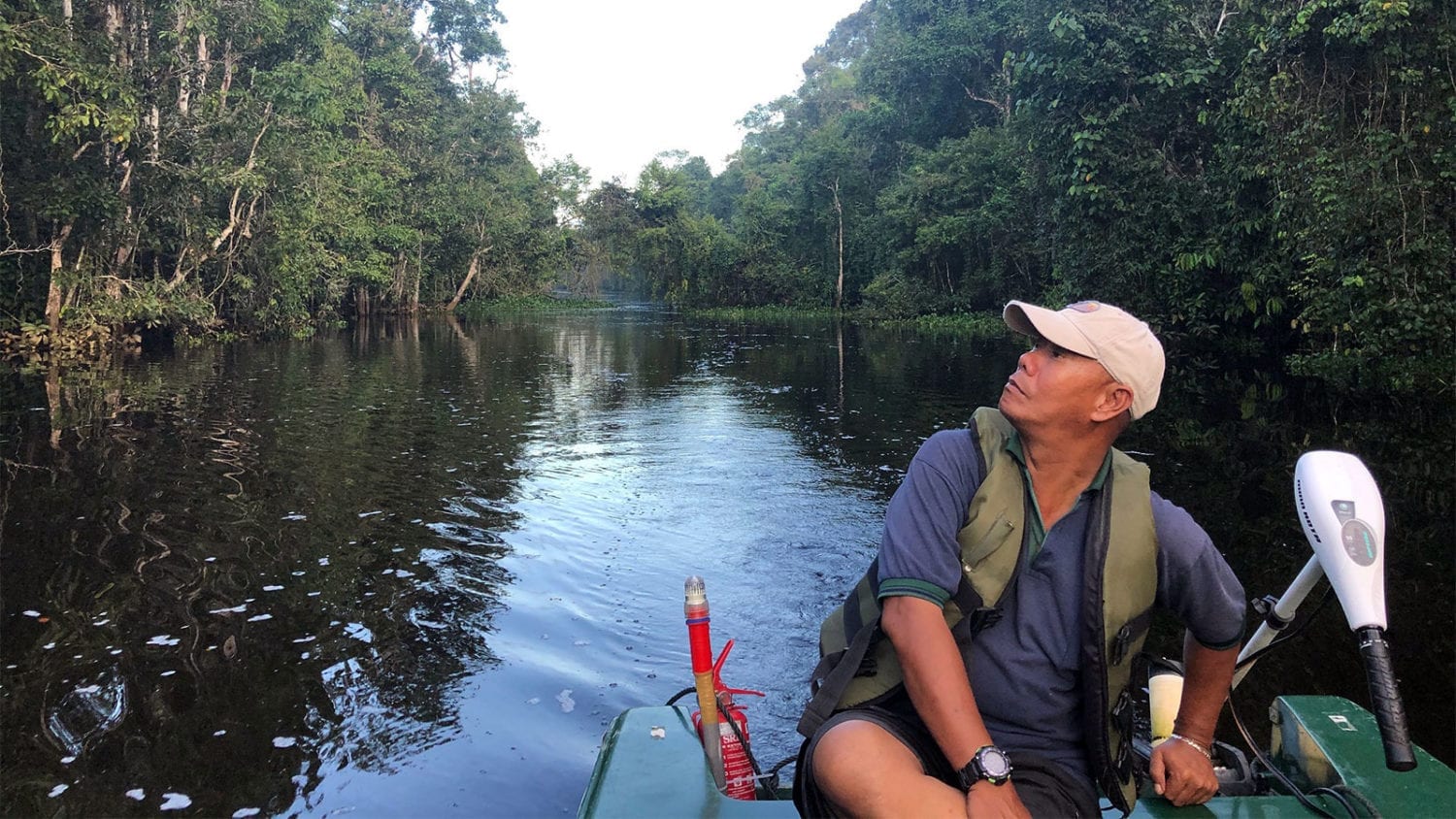 As in the San Juan Islands, an essential component of sustainability is education. Our rainforest guide, Fernando, greeted us warmly as he gave us a reusable fabric bag of educational materials. He proudly showed off the bag and punctuated that they don’t use plastic. Then he went on to ask if we had a water bottle, as they have a refill station and don’t distribute plastic bottles. We not only had the water bottle that we brought with us from San Juan Island but two new ones given to us by the last dive resort we visited in Indonesia. 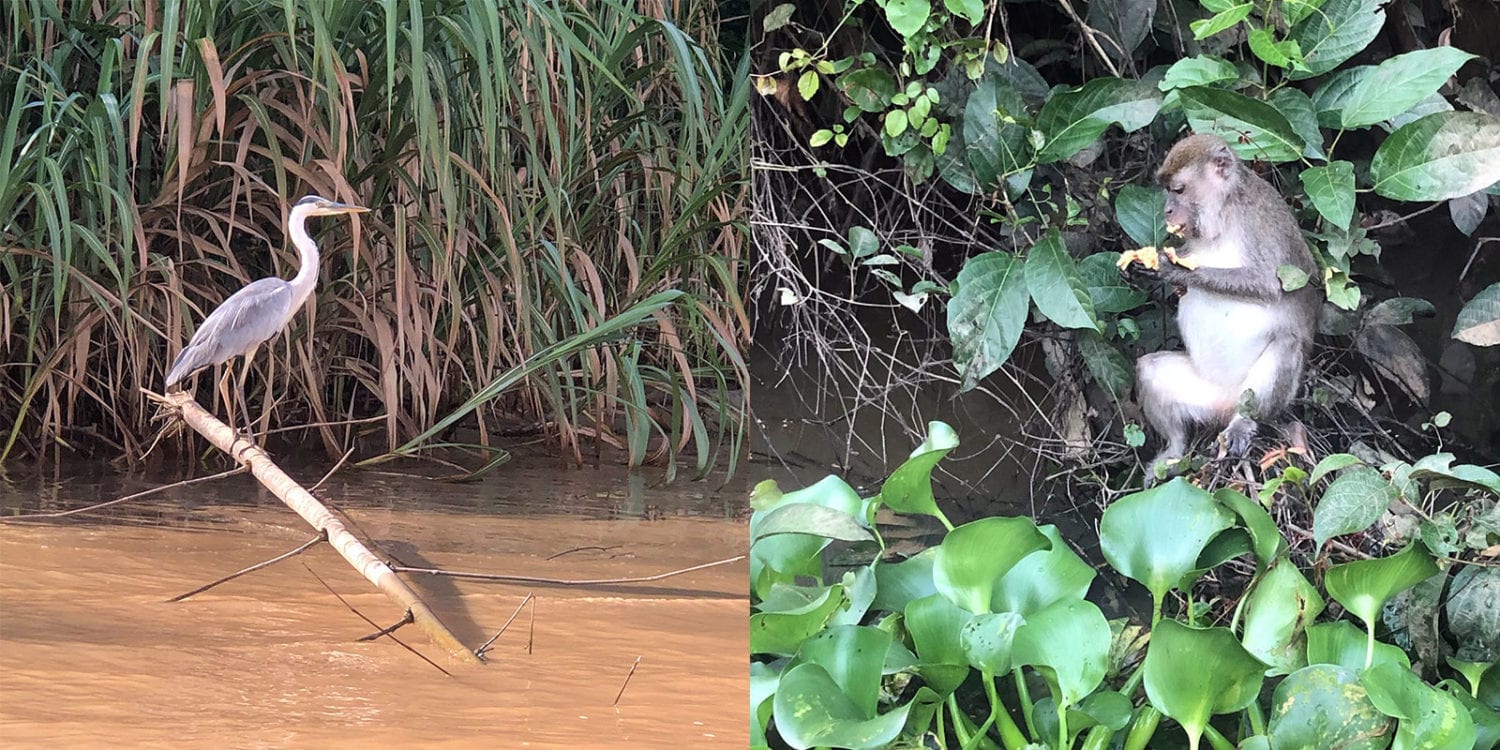 He was proud that the local government has set aside land that will remain untouched forever. These forests are critical habitat for many endangered species. Some of the preserved land is secondary forests that have been selectively logged and others first-growth virgin rainforest. He praised the work of the World Wildlife Foundation, foreign governments, and independent conservationists that have invested money in the region for research, preservation, education, forestry programs, and rehabilitation centers for stranded orangutans and sun bears. We trekked on the land of one local who had an agreement with several of the wildlife companies. They paid him not to turn his land into a palm oil plantation. Tourist dollars are helping to assure that his tract of land stays intact.

The next lodge we went to greeted us with the gift of another shiny metal water bottle. As we were oriented to the amenities of our villa, all the green practices were highlighted – evaporative cooling instead of air conditioning, native architecture to help with the jungle heat, rechargeable batteries for the flashlights, and an on-demand water heater, which we never used as we found the ambient temperature of the water refreshing. We were cautioned not to spray bug spray outside as it can harm the environment. (We took a bit of the San Juans with us and used Pelindaba Lavender Farm’s lavender bug spray which is made from their organic lavender essential oil.) When the lodge packed us a meal to go, they used recycled paper containers and bamboo utensils. When we were on a day trip, they packed the meal in reusable containers and used regular plates and flatware. We were also asked to do the obvious – reuse towels, conserve water when bathing, turn off lights and other appliances when we weren’t in the unit. When we were viewing wildlife, there were also a series of guidelines to ensure that the wildlife stays wild. The general manager was very receptive to new ideas and before we left, we suggested a few green ideas for them to consider implementing.

After our trip to the jungle, we headed to check out the marine parks and dive in a protected sanctuary off Sabah’s coast. There we met with Aaron, a marine biologist who was on staff at the diving resort. Aaron made a point to tell us that he wasn’t just jewelry but that the owner has a real commitment to sustaining the reefs and the marine life around the resort. Aaron is not only charged with educating the dive guides, staff, and visitors, but oversees a coral restoration around the island as well. We saw a number of the coral nurseries he planted while diving the house reef. 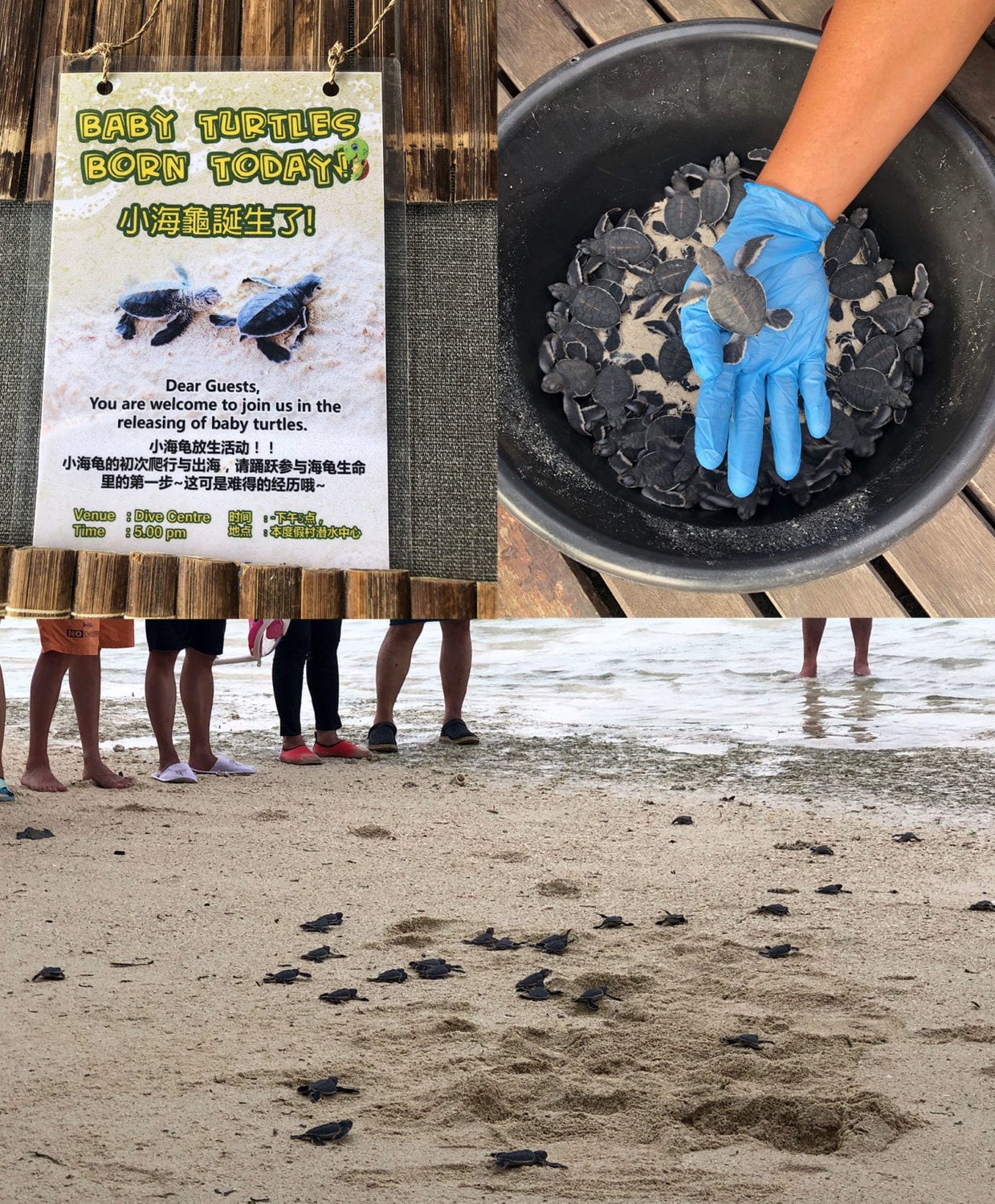 He also oversees a turtle hatchery program. They patrol the beaches at night looking for nesting turtles. Once a turtle lays her eggs she goes back to the sea leaving the eggs unattended. The island is full of opportunistic monitor lizards and marine birds who look to a nest of turtle eggs as a tasty treat. Aaron and his team collect the nests and put them in the hatchery. Within 24 hours of hatching he releases the baby turtles to the ocean on the same beach where the nest was found. The survival rate of a baby turtles in the wild is less than 1%. As the baby turtles make their way across the sand to the ocean they remember the beach where they were released. Hopefully they will survive 30 years, when they reach maturity, and return to this beach to lay their own nests. Aaron and his team are doing their part to give the baby turtle population a better chance.

In addition to his work at the resort, he works regionally with his counterparts on the mainland to educate the children. He works with several floating fishing villages. They dot the landscape from the main port town toward the protected areas. “The children are the voices of change,” he says. They practice what they learn at school and go home and hopefully educate their parents not to throw trash out their window into the sea, for example.

We have made numerous trips to Asia over the past seven years, and each trip we notice that conservation is first and foremost. The reefs and sea where we were diving were surprisingly clean. When we did see a rare piece of plastic or foreign debris, before we could even grab it our dive master had it safely tucked in his equipment for disposal topside. Over the course of our five-week trip, we never received a plastic water bottle, straw, or plastic bag.

There were so many parallels to our small island community half a world away. The San Juan Islands want to attract the “eco-minded” tourist. Those who will come and take only photos and leave only footprints. Our whale watch and kayaking outfitters educate visitors about the delicate balance of our ecosystem and how we can all help by doing our part. Coho Restaurant works closely with island and local farms to source ingredients close to home. Our food waste is returned to the farms to use for compost and animal feed. The inn employs green practices not only in our food service, but in our physical plant as well. We invite you to do your part to help preserve the San Juan Islands.

Here are some travel tips to plan a green vacation.

Hike out to the Cattle Point Lighthouse on San Juan Island

Something that we have in abundance on the San Juan Islands are scenic vistas, and the Cattle Point Lighthouse is a particularly picturesque lookout area—with views stretching out to the Olympic and Cascade Mountains and the surrounding islands. The south side of San Juan Island has a striking landscape with

The Best San Juan Island Lodging for your next Getaway

When you begin hunting for your San Juan Island Lodging for your next getaway, you won’t find anything better than our San Juan Island Inn Collection. The Harrison House Suites and Tucker House Inn offer an array of accommodation styles for romantic getaways for two, family-friendly trips (including your pets),

An Elegant Meal at Coho Restaurant

Dining out in the Northwest is a pure delight. We’re known in this corner of Washington State for our abundance of fresh seafood, farm-grown produce, local proteins, and foraged ingredients. The menu at Coho Restaurant in Friday Harbor showcases these ingredients with elegant preparations and innovative recipes. You’ll quickly see

Join our email newsletter to get the lastest promotions & new package deals.

Get our Travel Planner to the San Juan Islands.  20+ pages outlining the Best of the Best!